Since Alex and I have been trying for while to get pregnant we’ve had some time to think about what to do to tell our family once we were expecting. First up, my parents.

THE THOMAZINS:
Growing up, every Friday night, we had Family Pizza night where my parents would order pizza and we would watch movies. So, Alex and I called Dominos Pizza on our way to Riverside and ordered a pizza with the words “Baby” spelled out in Pepperoni. They were less than helpful and ended up telling us they were too busy to accommodate us — Boo, Dominos. But Alex took control and called Romano’s Pizza in Canyon Crest and they graciously created our pizza. 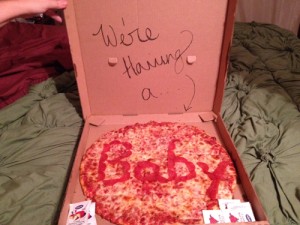 I wrote on the inside of the lid “We’re having a…” and then “Baby” was spelled out in the pepperoni. We drove to my parents after being stuck in traffic for 3 hours and arrive with a cold pizza. My parents had already eaten, I was starving and my parents were already in bed. Nevertheless we were so stoked to share the news with them. I opened the box and said, “Oh my gosh, guys… look what they wrote on our pizza?”

My parents stared and in unison said, “We’re having a… Pizza?” With utter confusion on their faces.

My jaw dropped. “Mom, Dad, what does it say ooooonnnn the pizza?”

Then they jumped out of bed and hugged us and screamed (well, my Dad said, “Ah-hah! Well good deal!” and hugged us).

Then we ate the baby pizza.

My sister and brother weren’t there for the occasion so I had to think on my feet about how to tell my brother. It went something like this:

JT: “So, I’m looking at two cars. One has a lot of space for my drums and the other is really cool looking.”

Me: “Cool, well just make sure you get one that can fit a car seat.”

Me: “For your little niece of nephew.”

Then he hugged me. 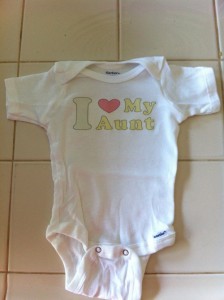 For my sister I designed a onesie with an iron on that said, “I <3 My Aunt”.

I wrapped it up, put it on her bed and told her she had to call me when she was opening it so I could hear her reaction.

She opened it an said, “Nat… are you serious?!”

Then we virtually hugged, talked about baby stuff and wedding stuff and cried because we were both so excited for each other.

THE LOPEZS:
On Sunday we were driving back to Camarillo and planned on seeing Alex’s family in LA since they were serving at the Harvest Crusade. In Alex’s family COFFEE is a huge deal. We all LOVE coffee and especially Starbucks — yes, we’re a cult and proud of it.

Anywho, Alex and I text everyone (Mom, Dad, Chris and Amber) to ask what they wanted from SBUX on us. We didn’t know they had already had some and we were meeting them for breakfast so no one was really into coffee. NOOOOOO!! But Alex and I said, “Forget it. We’re getting it anyway.”

So we pulled up and ordered everyone their usual, but on each cup Alex wrote their respective names: Grandma, Papa, Uncle Chris, and Aunt Amber.

We found parking and we’re about to meet up with them when a HUGE Harvest mob started coming towards us. Everyone was stopping us for hugs and quick chats but I was so nervous I’m pretty sure I just stared awkwardly at everyone and I was so nervous that someone was going to see the cups!

After the crowd passed Alex’s Mom reached for the tray and said, “Oh! Grandma, that’s me. And here’s Papa’s.” And didn’t think anything of it, since they are already grandparents to little Julian. Alex was holding Amber’s and she said, “Does mine say, ‘Amber Amber’? Wait… does it say, ‘Aunt Amber’?” 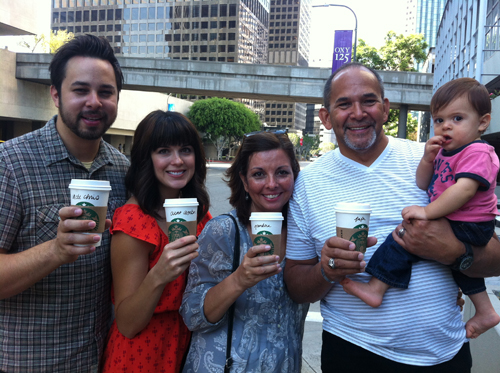 Booya, we were right. She figured it out first! Then Debbie turned around and screamed, “Are you pregnant?!”

I was so nervous I just keep shaking my head yes and Alex had a HUGE grin on his face. Everyone shouted and hugged us and Julian looked confused — probably because he was wondering where his Starbucks was.

So there you have it, folks! The family reveal — we are so blessed by this crazy group.