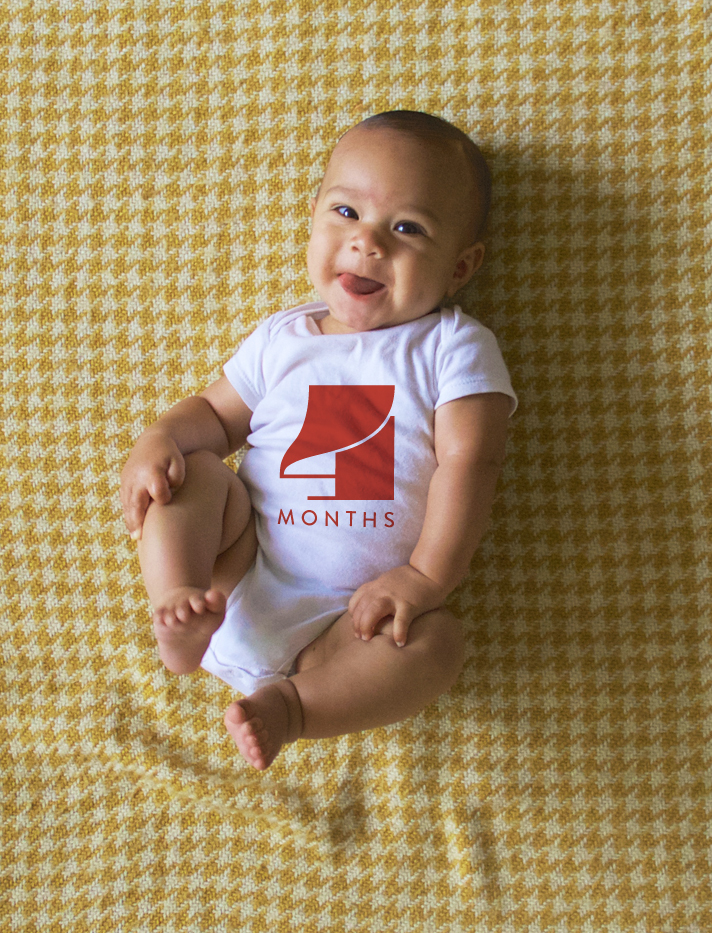 Teddy, I know I say it all the time but you are just the best baby! You are so easy, friendly, cuddly and so darn sweet.  You make everyone feel like a million bucks with your sweet smile and you’re growing leaps and bounds. Your doctor says you have the biggest personality and you are so strong. He’s right! You are constantly on the move, squirming and scooting and rolling everywhere. You are getting very tired of your playmat and find it boring. You always have to exploring whatever I’m doing. It’s so sweet to watch you intensely taking in all my moves when I’m making dinner or doing dishes and playing with Boone.

You love to grab and pull. And you really love your puppy Boone. He dances around for you and you laugh. You started laughing some really deep laughs this month and it brings Daddy and I so much joy to hear it. Thank you so much for not growing up too fast — I love every moment I get to spend with you.

Teddy is now 15.25 lbs and well over 2 feet long now. He is usually in the 90th percentile for weight, but he’s dropped down to the 70th which the doctor said is probably because of all his moving around. He rolls everywhere and squirms all the time. 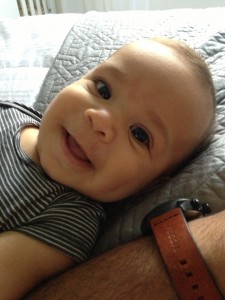 My favorite thing that Teddy has done more intentionally now is holding my hand and reaching for Daddy’s & my face. It is just the sweetest thing every time. He LOVES to intertwine his fingers with mine and he even finds it comforting while we drive in the car if he can hold my hand.

Some of Teddy’s favorite people are his grandparents. He LOVES to Facetime with them and we do it as often as we can.

Some new tricks Teddy learned this month was sitting up on his own. I still prop him with pillows but he sure has some strong abs! He can sit up all on his own from a reclined position. He’s using his strength any way he can, from turning over his play gym to throwing things, and kicking and grabbing. If he wants something he just goes for it!

Another thing he’s been up to this month is getting up on his knees while on his tummy. He is working so hard to crawl, but I think he’s still going to hold out until 6 months to actually do it. 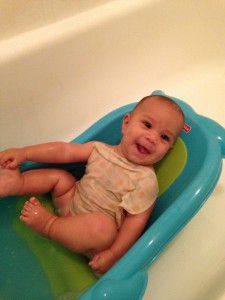 Alex thinks that he’ll be crawling by the end of this month. We’ll see!

Teddy is also obsessed with his feet. He grabs them all the time, even in the bath, which makes it hard to keep him reclined. Once he’s fully sitting up on his own we will have to transition him to a bigger tub, that’s for sure! He can’t quite get his feet into his mouth yet, but he does everything he can to try. It is so amazing to see him trying to accomplish things on his own. I’m so proud!

Now, some new things Teddy is doing that are not so awesome… He has been waking up more during the night. The doctor said it’s probably because he’s so much more aware and that putting him in his own room soon would be a good idea. I agree! It’s like every sound wakes him up. And, he’s eating a lot more — which is most likely because he’s going through a growth spurt.

But, seriously will we ever get to sleep again?? 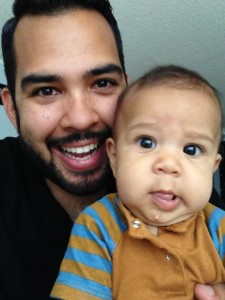 The last thing that hasn’t been that awesome is Teddy’s lack of enthusiasm about the adventure chair. We started calling it that because we wanted him to like it and be excited for all our adventures. We were doing great there for a while, but now he seems to be very aware of the fact that he’s strapped in. He can’t grab for things as easily and he can’t reach his toes. He gets so frustrated! I hope that goes away soon because we drive a lot!

Overall though, this kid is amazing. He’s the best Teddy around. I can’t wait to hear his little voice in the next few months and see how he will continue to grow!

Until then, he are a few pictures from this month.