I had the amazing privilege to be witness to my best friend, Amy’s birth of her second child and first boy, Camden Reed Cotsenmoyer. He didn’t have a name though until after he was born since his Mom and Dad hadn’t been able to decide on one. They did, however, have it narrowed down to about 3 names.

First, let me say that I had mixed feelings about being there for the delivery. Knowing that I have to deliver my baby in just 10 weeks gave me paused because I didn’t want to be freaked out, but I prayed a lot about it and knew that I really wanted to be there for Amy — and I’m so glad I was.

Now, for the story.

It started on Tuesday the 26th around 12:30. Amy called me and said that her midwife had stripped her membranes (again — yikes!) and she had some constant cramping since then. I decided to grab the 2:30 train to La Sierra which is right across from Kaiser. Lets just say I was so anxious that I wasn’t going to be there in time that I got a little “sick” on the train. Then, my train was delayed in Buena Park due to a gas leak on an overpass we have to travel under. My Mom almost hopped in her car to come get me, but we started moving shortly after that. Mom met me at the station, dropped me off at the hospital and took Boone with her — right as Am and Trav were pulling in! (Thanks Mom!!) We went to L&D, checked in and waited. Amy kept saying she knew they were going to send her home and sure enough — she hadn’t progressed at all since her appointment that morning. Boo.

We decided to do everything we could to make the baby come out. We ate spicy Mexican food and walked around the mall twice. No dice. And I could tell Amy was getting a little restless and just wanted to go home. We made her do a few squats in the parking lot and then went home. After Tenley and I went to bed, Amy started laboring for the next two hours. I was asleep on and off but woke up at 12:15 when Robin arrived. Trav said we were going back to the hospital and leaving in 15 mins. I started timing Amy’s contractions and they were 3 mins apart and 1.5 minutes long! Oh boy. Then she started barfing. Yikes! We needed to go! As soon as Amy finished barfing in every sink in the house we were off. She consistently contracted all the way there.

When we arrived at the hospital Amy was worried she had waited too long and wouldn’t have the chance for an epidural if she needed. They decided to admit her, checked her and she was 6-7 cm! Yahoo! An hour later (about 3:15) they checked her again and she was a 7-8. And boy, was she ever ready for an epidural! It was so intense seeing her in that much pain and not being able to help her. Trav was such a trooper! She completely relied on him for comfort and he was right there when she needed with ice chips and a hand to squeeze the crap out of.

The anesthesiologist came in and I booked it out of there so she could get her meds. Whitney, Robin and I came in 45 mins later and Amy was doing much better. The midwife came in to check her and she was at 10 and ready to push! Holy cow!! We all scuffled about and someone went to get Trav. Amy pushed a few good times but nothing happened. They decided to wait a bit until the baby dropped some more.

A few more visitors came in and few more times she tried to push him down. Finally at 5:00 it was time for the real stuff! With Trav on one side, the L&D nurse on the other and Teresa cheering her on, Amy pushed and pushed! The midwife opted for an episiotomy and helped massage the baby down further. They decided to move Amy to her side and have her push and he finally moved down. Back onto her back, a few more pushes and he came barreling out at 5:13 am! He weighed exactly the same as his sister, 7lbs and 6oz and was 19.5 in long. It was amazing. They put him on Amy for a while and then grabbed him for some checking. 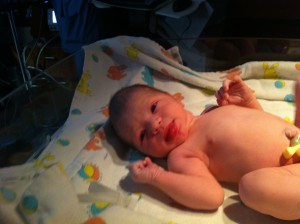 So many amazing people were there to assist with checking the baby’s heart beat, which had been and issue for the past two weeks, clean him up and stamp his feet. He barely cried — already so well behaved! He was very content under the heat lamps and holding Daddy’s hand until he got to feed from Mommy. 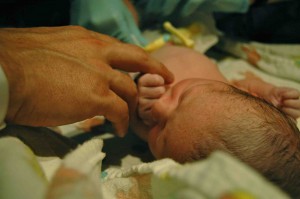 One problem though! The poor kid still didn’t have a name!! Amy had said she would know once she had seen him what his name would be so Trav went over to her and she whispered it to him. She got teary-eyed and couldn’t say it so she said, “Nevermind its a surprise!” Then she finally said, “Camden Reed.” Yay!!! Finally a name for this little guy! 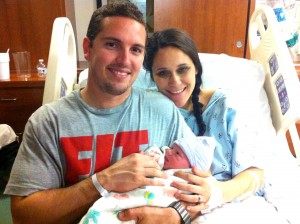 They gave Camden to his Mommy and he latched right away. The L&D nurse was so helpful since Camden had started making a clicking noise and she helped correct Amy on the latch and both Mommy and baby did great.

Trav and I went into the waiting room to announce the name and everyone was so happy — probably even more happy that he had a name than that he was born!

We all took turns congratulating Mommy and Daddy and holding little Camden Reed. Then we left to take naps and let the new family get acquainted.

Later, once they had moved to the postpartum wing, Tenley got to meet her baby brother! She was so excited. She brought him a toy puppy and a drawing of hearts. She immediately wanted to hold him and kept saying, “Don’t cry baby brother…” In a sweet voice whenever he would fuss. I about balled my eyes out it was so sweet. 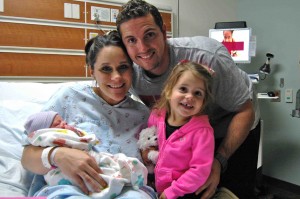 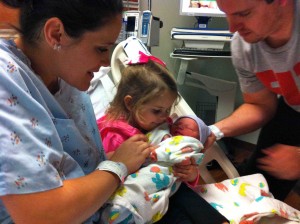 After all that, I am more ready than ever for my own little baby to come! I know every labor is different but Amy’s labor could not have gone any better. She felt completely listened to and no one pressured her to do anything. Her body knew exactly what to do and her team knew exactly what to tell her and how to respond to her body. I was amazed! So, for the millionth time… Can it be May already?!

Thank you Amy and Trav for letting me be a part of this experience! And thank you little Camden Reed who is asleep in my arms right now while I type this blogpost on my phone. Sweet dreams little bubba.