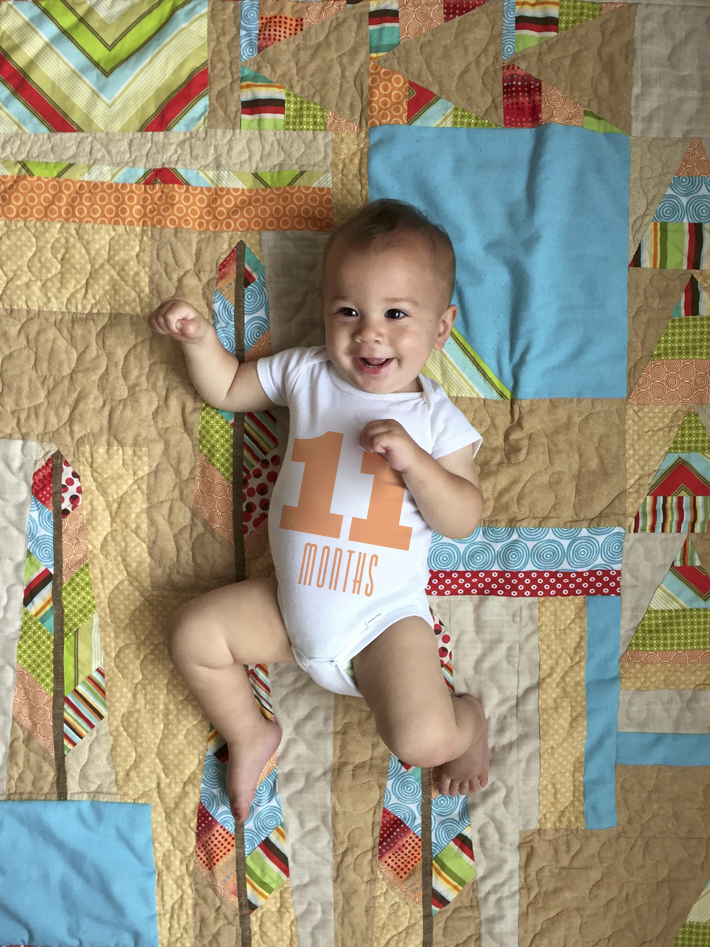 You are now 11 months old. You’re going to be 1 next month. You are a babbling, independent, opinionated, spunky, adventurous bundle of love. You are affectionate and sweet, have NO personal space, you give kisses and hugs and you love cars. You can play by yourself for an hour — I’m not exaggerating. You make “vrooooom” sounds while you play with anything that remotely looks like a car. You love your brother’s quad and you crawl as fast as humanly possible to it when you’re released to the outdoors.

You’re starting to point to the things you want while grunting and you love to eat. Constantly. I’m going to have to buy a second fridge at the rate you and your brother are consuming the food I buy. Thank the Lord for Costco.

You have 8 teeth now and are working on a new pair of lower teeth. You also had an awful cold this month which left you and your brother energy-less for almost a week. You still managed to smile through the tired and smear your snot all over everything. Even while sick you took your first step! Your great-cousin (I think? second cousin once removed? I don’t know) was playing with you on Grammy’s floor when you suddenly decided that you’d let go of the couch and take a step. I was floored. Badoom, #momjoke.

This month was full of adventure. Mostly the Disney kind. Since we decided to get passes we’ve gone at least once a month. This past month we went twice! It’s been a blast taking the kids and I’m really hoping they don’t get too spoiled in the Disney way, because sometimes I think I enjoy it more than they do.

We also made a trip up to Santa Barbara (gosh the drive up is gorgeous) to meet up with my cousin and her son at the Zoo. The Santa Barbara Zoo is beautiful and we could not have asked for a more perfect day. I’ve decided too that I need to have a 12 year old with me at all times. Gabriel was so helpful with the littles.

Sam is starting to show more of his personality  and preferences lately. When he doesn’t get what he wants or you tell him “no” he throws himself on the floor and flops around crying. I’m talking huge crocodile tears. It’s all I can do not to laugh. He’s also settled into his little brother role fairly well. The other day I set him up with his bottle, Teddy with an apple and I went to my bedroom to get dressed. While I was in my room I heard Sam cry/yell for a second and then stop. When I came out, Teddy was sitting on the couch sans his apple, which Sam was chomping on happily. Essentially, he’s learned that if he cries Teddy will give him what he wants so Teddy doesn’t get into trouble. Hah! I had to explain to Teddy the difference between sharing and enabling. And of course, once I took the apple away and gave it back to Teddy the “tantrum” ensued. Good grief. Whomever said, “boys aren’t dramatic” NEVER had boys.

The bond between Sam and Teddy is growing day by day. Teddy is usually up first and while I’m doing my devos or making breakfast or let’s be real, waking up with coffee Teddy sits on the couch with some cheerios watching Daniel Tiger or playing in the play room. As soon as he hears the slightest whine in the monitor he jumps up and says, “Sammy’s awake!” We run into Sam’s room to see a happy baby grinning ear to ear as his brother runs to his crib and says, “Hiiiii Sammy. You have good nap, yeah?” Gah, my heart. They play together… like brothers. It’s not always nice, it’s not always gentle, it’s not always calm, but, Sam is learning to hold his own and Teddy is learning to be more empathetic. The days are a constant adrenaline rush. I can only imagine how many grey hairs I’ll have by the time they are 10 and 8. Lord, help me.

I can’t believe we’re entering into the last month of infant-hood. I’m not entirely sure when they are technically done being infants, but I like to imagine it’s until they’re ONE or walking. So, I’ll hold on to your last month of being my baby, before I officially have two toddlers. Ahhh!