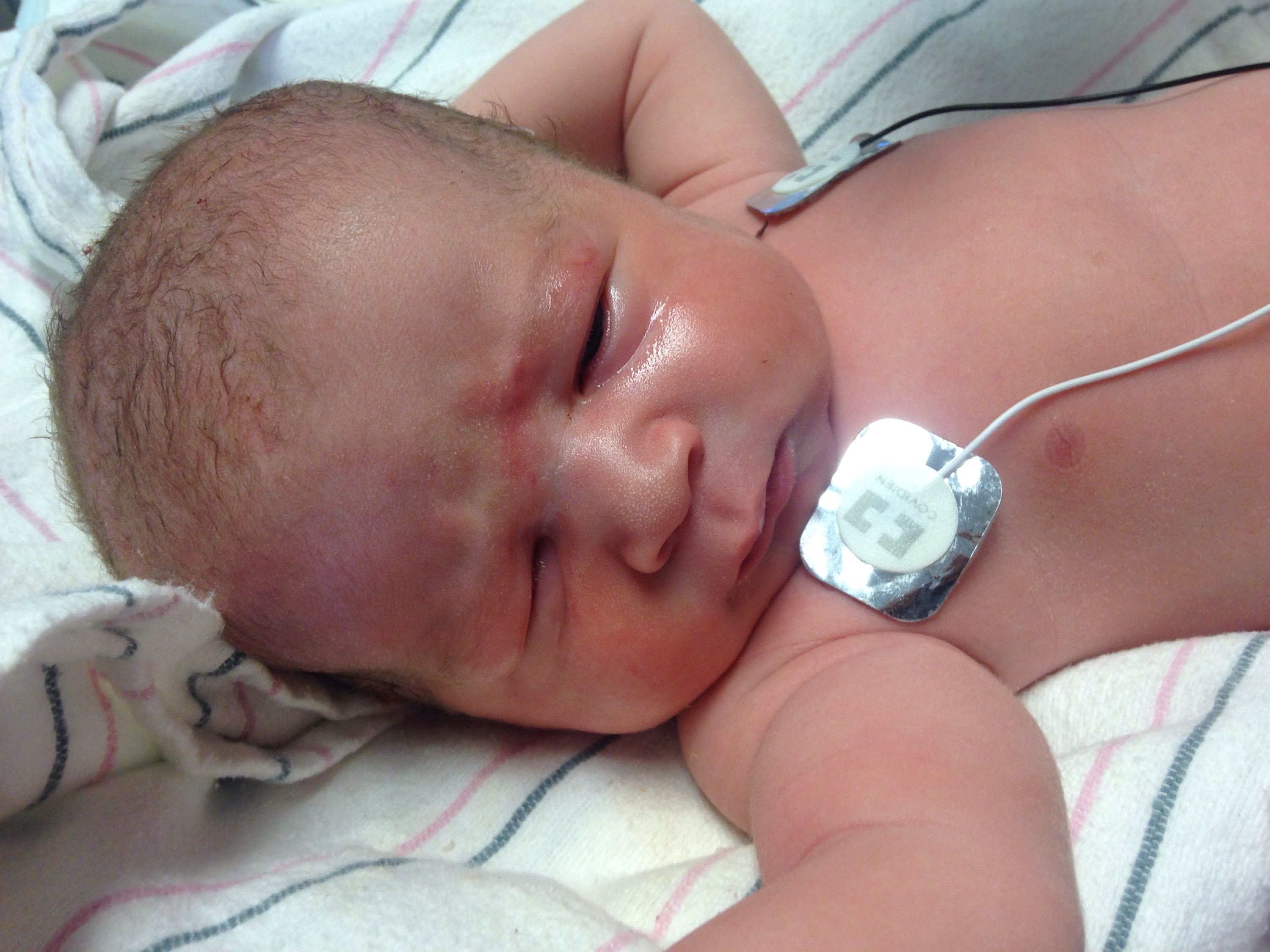 Sammy’s birth was a “planned birth”, meaning I was going to go to the hospital, walk up to L&D, be admitted to a room, prepped and then walk down to the OR, receive a spinal block and then have the baby surgically removed from my body. We arrived at the decision to have a scheduled csection after discussing options with my doctor and discussing how my labor with Teddy went. So many times I went back and forth about whether a scheduled c section was right. Was I playing God? Was it too soon? Would the baby be ready to come into the world? Would we still be able to bond? Would I still be able to breastfeed?

I went through multiple emotions leading up to the day of Sam’s birth, especially after having a previous miscarriage. I worried that this wouldn’t feel like a birth, that I wouldn’t bond with him and that without the natural process of labor I wouldn’t be able to breastfeed and there would be complications. Some of that was true, and in huge ways God showed up to prove that wasn’t all true. 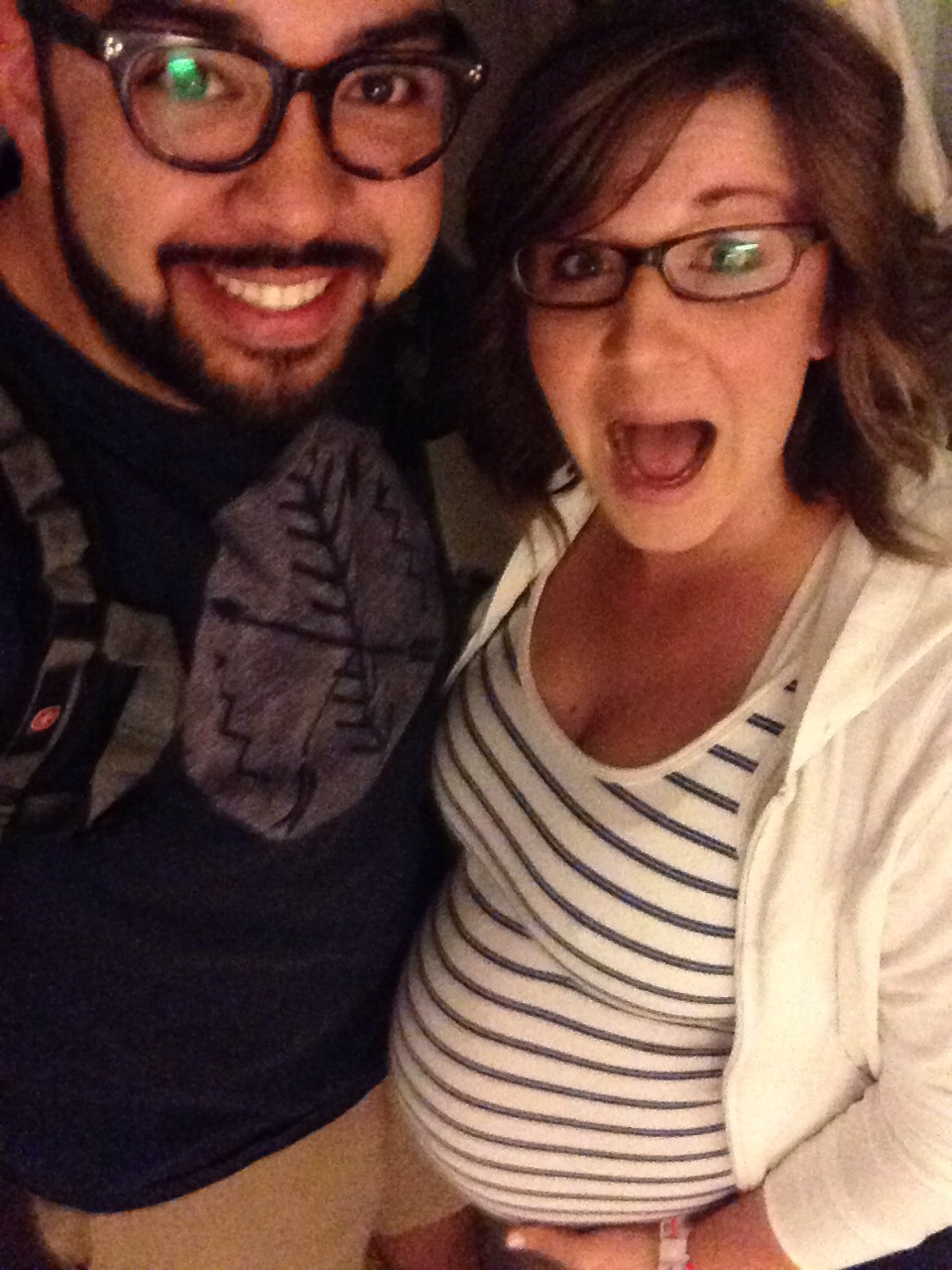 Alex and I arrived at the hospital at 5:30 am. I had only slept for 2.5 hours so as soon as they gowned me and started hooking me up I started to doze off. Debbie and Wil showed up at 7 am for Debbie and Alex to be suited up! Debbie was pretty excited to see what a csection looked like from the other side having has two with her boys.

I walked down the hall at 7:30 am and walked straight into the OR. The anesthesiologist met me there with the NICU assistant to discuss how to birth would go. And we started. My doctor duo was amazing. I started feeling the effects of the spinal right away and I even threw up a bit before Alex and Debbie got in the room. But as soon as it all kicked in, I was good to go.

It’s so surreal to have conversations with the surgeons while you falayed open on the table. We talked about their kids, their recent trip to Africa, and complained about the air conditioning (or lack there of) in the OR. And then, they were about to pull the baby out!

Alex leaned over the screen and said, “Oh! It’s a boy!” 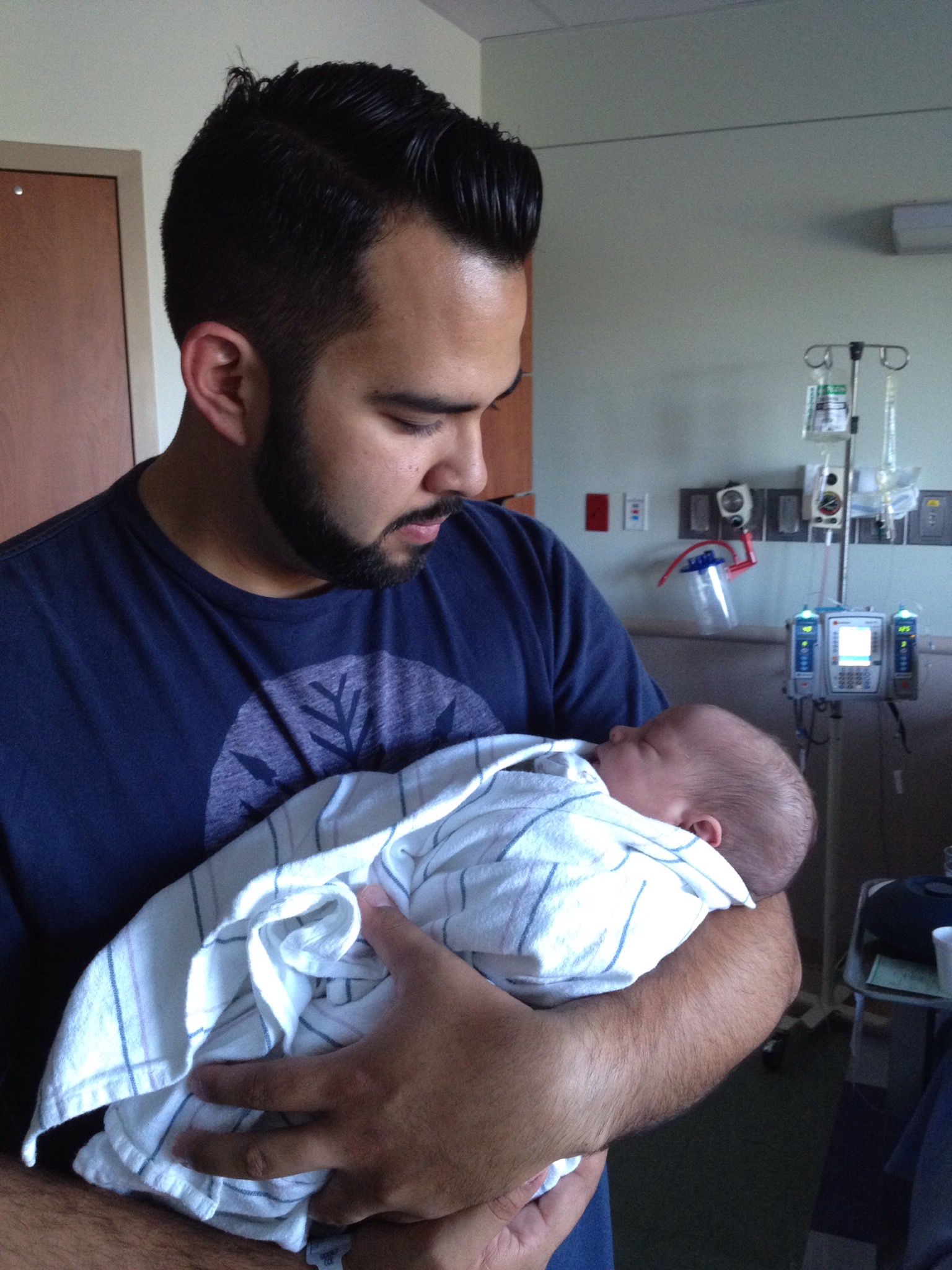 Debbie was so great. She caught everything on tape and took pictures too. They had to suction him right away because he had lots of fluid. It felt like forever just watching them try and encourage him to breath. Then the oxygen mask came out. I started to panic. Alex was just standing there looking at him. I could tell he was anxious and just as I was about to shout out, “hold his hand!” Alex asked it he could touch him. Huge relief. The NICU nurse was fantastic. He let Alex hold the oxygen mask on and stroke his arm, talking to him. But, it didn’t clear up. 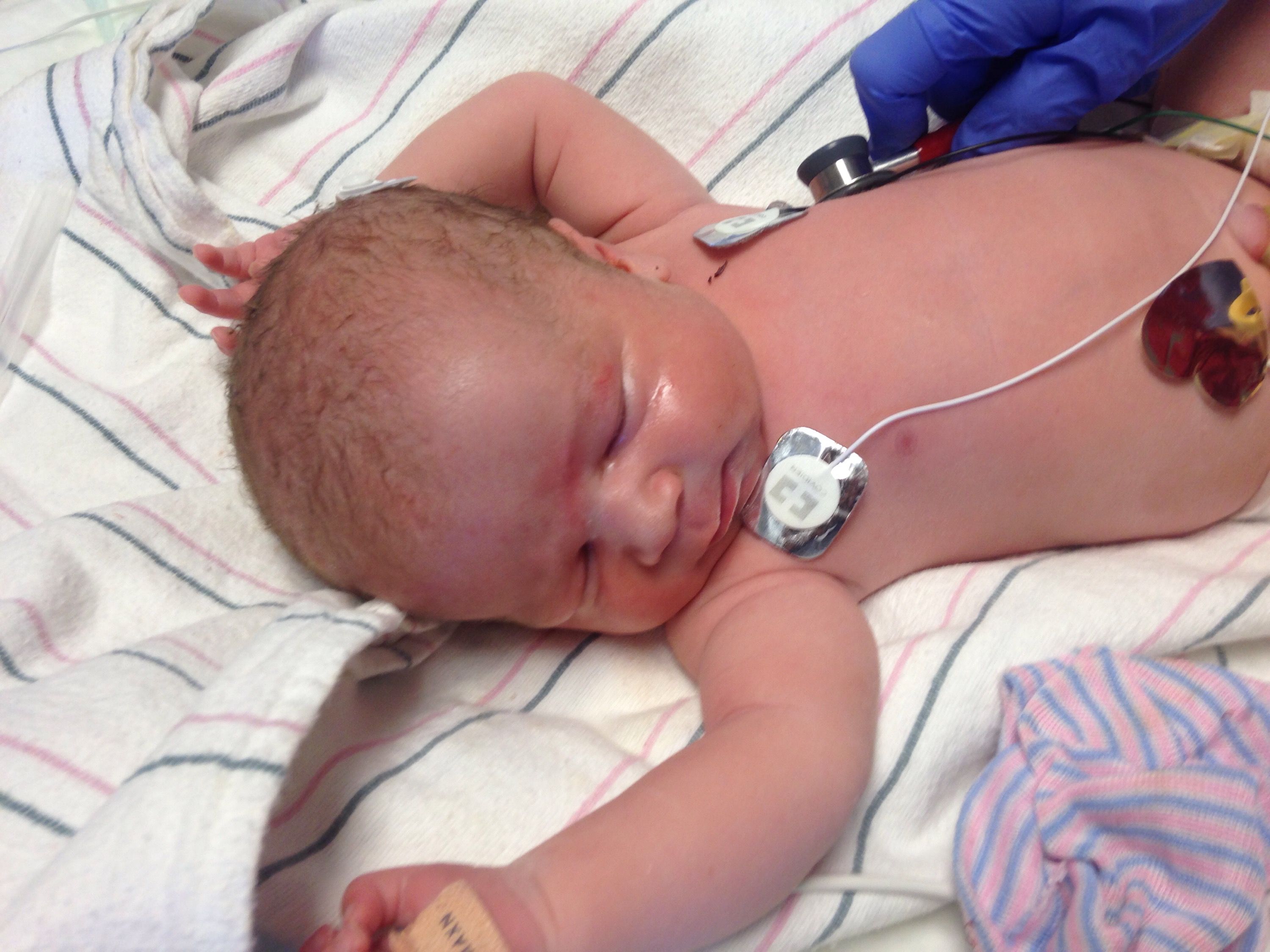 I so badly wanted to hold him but as soon as they handed him to me and I saw his ragged breathing I couldn’t help but hand him back. I couldn’t fix him. And I had to stay where I was. But I knew Alex could be there. My other half.

Everyone kept saying he would be okay but I couldn’t believe them.

Alex had Debbie go into the waiting room to update everyone. She said, “It’s a boy! And he’s WHITE! He’s so beautiful!”

This little boy was/is so pale. I almost didn’t believe he had just come out of me. He looked so different from his brother. And he’s so beautiful! I was so glad Debbie was there to update everyone so Alex could be with our little pale baby boy I n the NICU.

For what felt like hours (and it was) I waited. I had a bad reaction to the morphine and threw up for almost 6 hours afterward. That caused some bruising and also meant I couldn’t visit Sam in the NICU. I tried so hard to not throw up so I could hold him, but I didn’t get to actually hold him until 6 hours later.

That 6 hours was hard for me. I know nothing was really wrong with him — he just needed help in transition, but I just couldn’t help escalating it in my mind. And the longer I didn’t hold him the more I felt that I wasn’t going to bond. 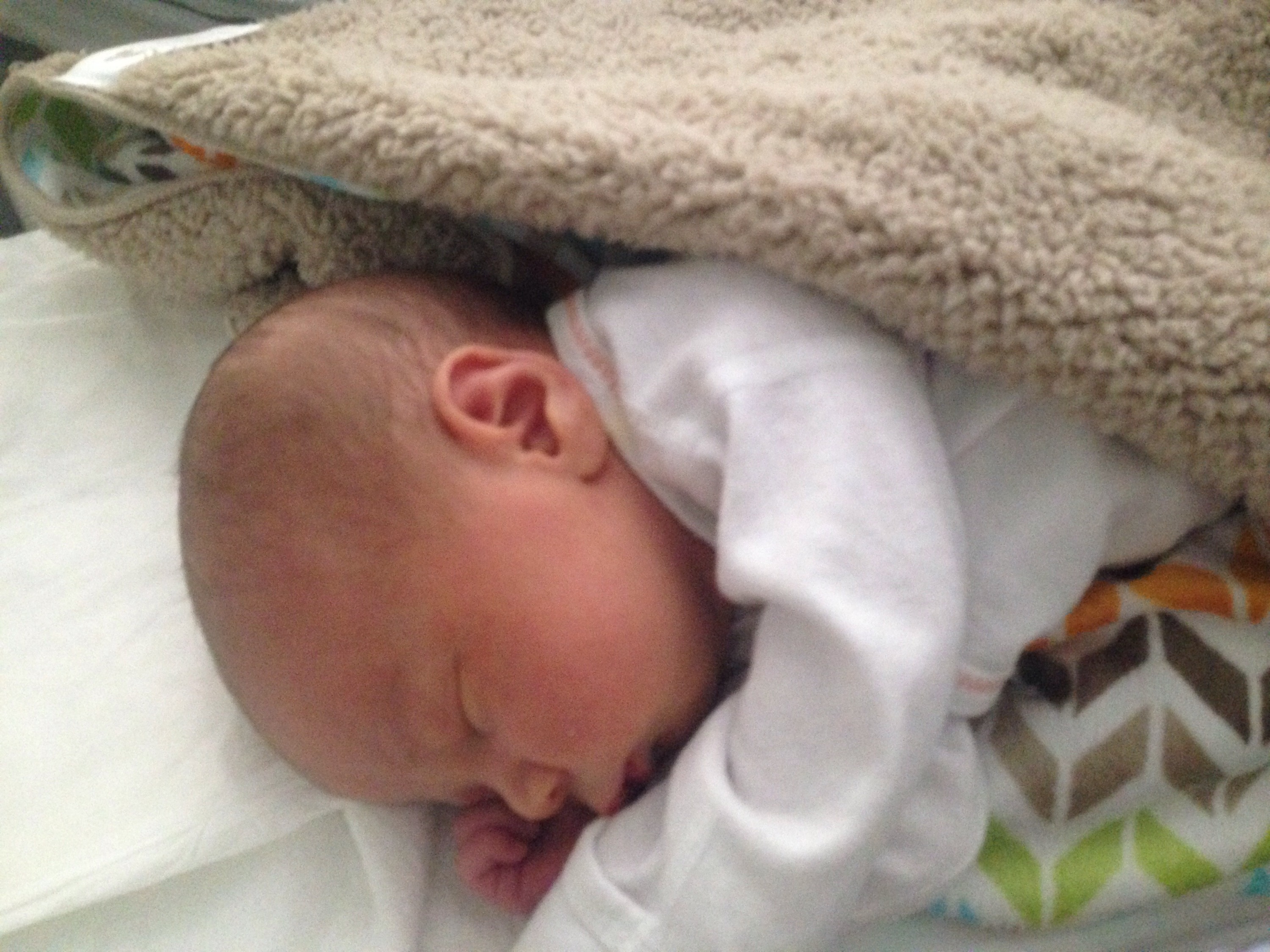 When Alex brought him to me, I only had to try for 5 mins to get him to nurse. The NICU was so great and didn’t try to supplement until I could nurse. And he latched right away. A huge relief. Alex, who had been trying to hold it all together, burst into tears. He was so worried for Sammy and knew how much it meant to me to get him to latch and finally hold him. He’s such a good man.

That first day was a blur. Everyone sweetly asked how I was doing. To be honest, it took me two days to feel truly bonded to him. I went through the motions the first day of feeding him and holding him and I allowed myself to be okay with that. I kept reminding myself that I have his whole life to love him. That I didn’t lose him. That he’s here and healthy.

Now, I never want to put him down. He’s with me all the time or being held by someone. He maybe spends 4 hours in his crib a day, if ever.